“ The soul aids the body, and at certain moments, raises it. It is the only bird which bears up its own cage. ”
Victor Hugo, Les Misérables (1862). copy citation

“His face wore a sort of severe flush. He was timid even to rudeness.
During all these trials he had felt himself encouraged and even uplifted, at times, by a secret force that he possessed within himself. The soul aids the body, and at certain moments, raises it. It is the only bird which bears up its own cage.
Besides his father's name, another name was graven in Marius' heart, the name of Thénardier. Marius, with his grave and enthusiastic nature, surrounded with a sort of aureole the man to whom, in his thoughts, he owed his father's life,—that intrepid sergeant who had saved the colonel amid the bullets and the cannon-balls of Waterloo.” source
Original quote
“L'âme aide le corps, et à de certains moments le soulève. C'est le seul oiseau qui soutienne sa cage.” Victor Hugo, Les Misérables

“like the eagle, his own flesh as well as all space was still a cage.” William Faulkner, Light in August

“The living bird is not its labelled bones.” Margaret Atwood, The Blind Assassin

“I see at intervals the glance of a curious sort of bird through the close-set bars of a cage: a vivid, restless, resolute captive is there; were it but free, it would soar cloud-high.” Charlotte Brontë, Jane Eyre

“I am no bird; and no net ensnares me; I am a free human being with an independent will, which I now exert to leave you.” Charlotte Brontë, Jane Eyre

“Woe, alas! to him who shall have loved only bodies, forms, appearances! Death will deprive him of all. Try to love souls, you will find them again.” Victor Hugo, Les Misérables

“I am not a collection of members which we call the human body: I am not a subtle air distributed through these members, I am not a wind, a fire, a vapour, a breath, nor anything at all which I can imagine or conceive; because I have assumed that...” René Descartes, Meditations on First Philosophy

“Physical relationship divorced from spiritual is body without soul.” Mahatma Gandhi, The Story of my Experiments with Truth 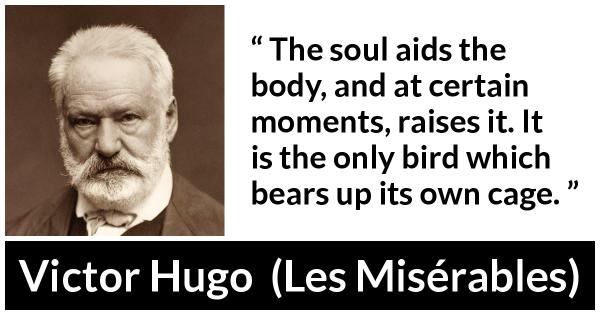 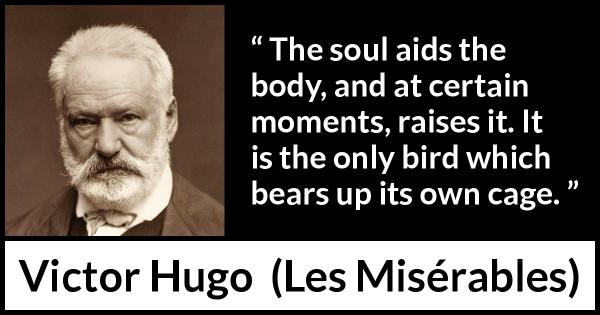 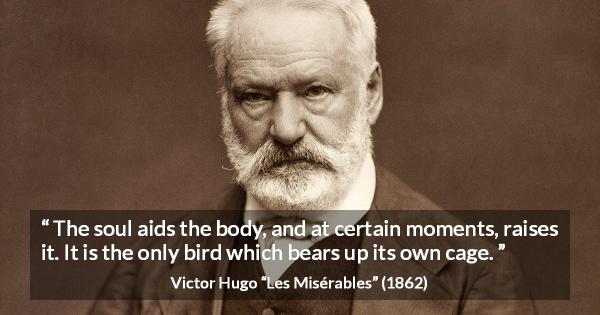 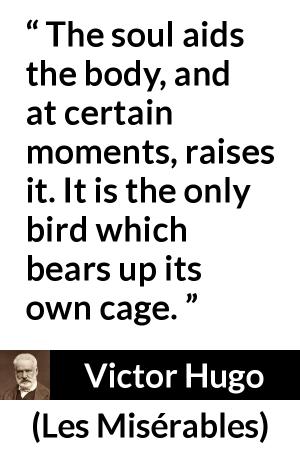 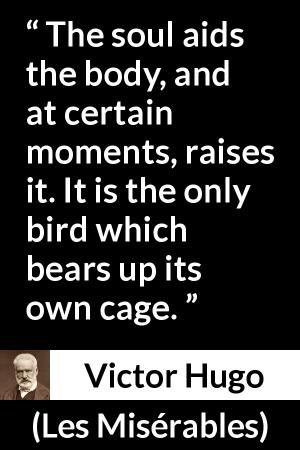 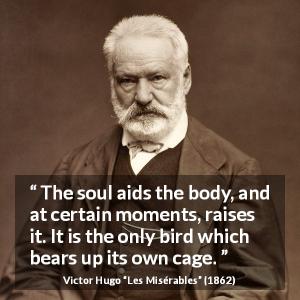