“ Perhaps the immobility of the things that surround us is forced upon them by our conviction that they are themselves, and not anything else, and by the immobility of our conceptions of them. ”
Marcel Proust, Swann's Way (1913). copy citation

“But for me it was enough if, in my own bed, my sleep was so heavy as completely to relax my consciousness; for then I lost all sense of the place in which I had gone to sleep, and when I awoke at midnight, not knowing where I was, I could not be sure at first who I was; I had only the most rudimentary sense of existence, such as may lurk and flicker in the depths of an animal's consciousness; I was more destitute of human qualities than the cave-dweller; but then the memory, not yet of the place in which I was, but of various other places where I had lived, and might now very possibly be, would come like a rope let down from heaven to draw me up out of the abyss of not-being, from which I could never have escaped by myself: in a flash I would traverse and surmount centuries of civilisation, and out of a half-visualised succession of oil-lamps, followed by shirts with turned-down collars, would put together by degrees the component parts of my ego.
Perhaps the immobility of the things that surround us is forced upon them by our conviction that they are themselves, and not anything else, and by the immobility of our conceptions of them. For it always happened that when I awoke like this, and my mind struggled in an unsuccessful attempt to discover where I was, everything would be moving round me through the darkness: things, places, years.” source
Original quote
“Peut-être l'immobilité des choses autour de nous leur est-elle imposée par notre certitude que ce sont elles et non pas d'autres, par l'immobilité de notre pensée en face d'elles.” Marcel Proust, Du côté de chez Swann

“All we have to believe with is our senses, the tools we use to perceive the world: our sight, our touch, our memory. If they lie to us, then nothing can be trusted. And even if we do not believe, then still we cannot travel in any other way than...” Neil Gaiman, American Gods

“by believing passionately in something which still does not exist, we create it. The nonexistent is whatever we have not sufficiently desired” Nikos Kazantzakis, Report to Greco 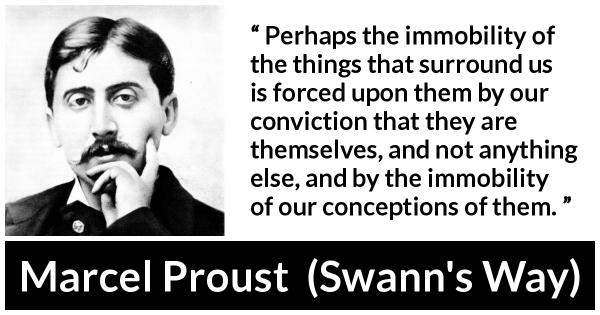 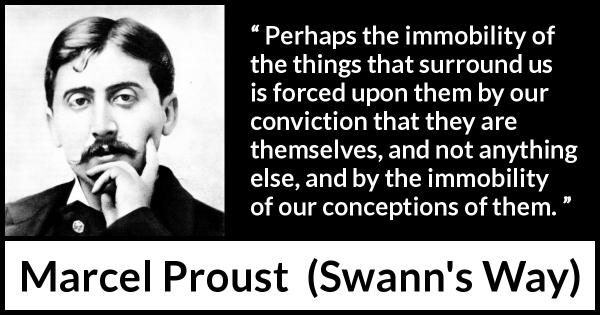 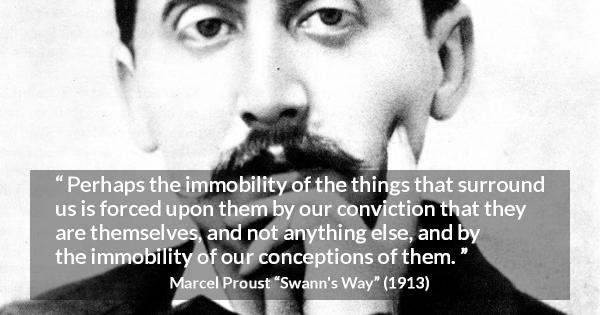 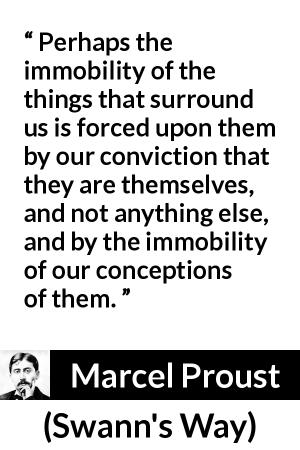 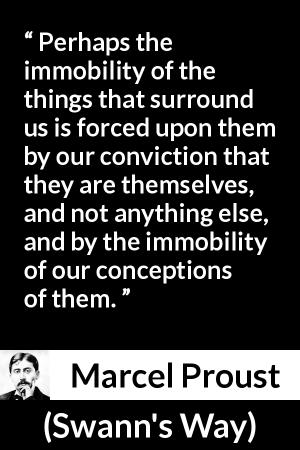 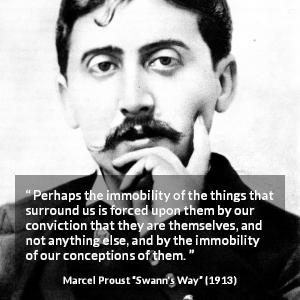