“ The reason the beasts give among themselves is that Man is the weakest and most defenseless of all living things, and it is unsportsmanlike to touch him. ”
Rudyard Kipling, The Jungle Book (1894). copy citation

“The real reason for this is that man-killing means, sooner or later, the arrival of white men on elephants, with guns, and hundreds of brown men with gongs and rockets and torches. Then everybody in the jungle suffers. The reason the beasts give among themselves is that Man is the weakest and most defenseless of all living things, and it is unsportsmanlike to touch him. They say too—and it is true—that man-eaters become mangy, and lose their teeth.
The purr grew louder, and ended in the full-throated «Aaarh!» of the tiger's charge.
Then there was a howl—an untigerish howl—from Shere Khan.” source

“People talk sometimes of bestial cruelty, but that's a great injustice and insult to the beasts; a beast can never be so cruel as a man, so artistically cruel.” Fyodor Dostoyevsky, The Brothers Karamazov

“Man is the only animal that can remain on friendly terms with the victims he intends to eat until he eats them.” Samuel Butler, The Note-Books of Samuel Butler

“In dim ways he recognised in man the animal that had fought itself to primacy over the other animals of the Wild.” Jack London, White Fang 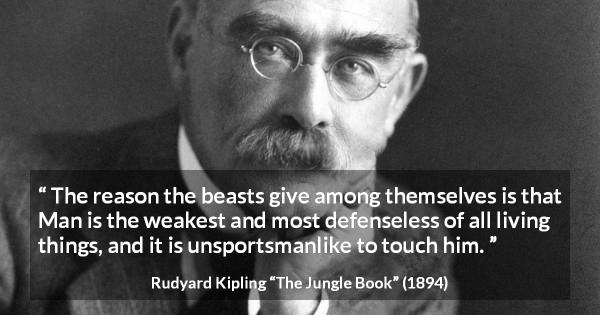 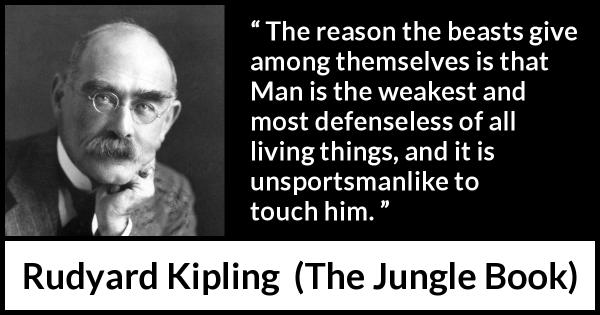 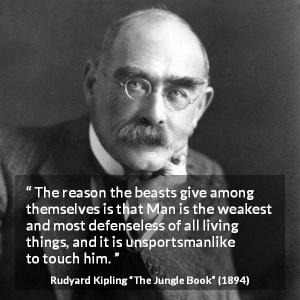