“ But immediately upon this I observed that, whilst I thus wished to think that all was false, it was absolutely necessary that I, who thus thought, should be somewhat; ”
René Descartes, Discourse on the Method (1637). copy citation

“Accordingly, seeing that our senses sometimes deceive us, I was willing to suppose that there existed nothing really such as they presented to us; and because some men err in reasoning, and fall into paralogisms, even on the simplest matters of geometry, I, convinced that I was as open to error as any other, rejected as false all the reasonings I had hitherto taken for demonstrations; and finally, when I considered that the very same thoughts (presentations) which we experience when awake may also be experienced when we are asleep, while there is at that time not one of them true, I supposed that all the objects (presentations) that had ever entered into my mind when awake, had in them no more truth than the illusions of my dreams. But immediately upon this I observed that, whilst I thus wished to think that all was false, it was absolutely necessary that I, who thus thought, should be somewhat; and as I observed that this truth, I think, therefore I am (COGITO ERGO SUM), was so certain and of such evidence that no ground of doubt, however extravagant, could be alleged by the sceptics capable of shaking it, I concluded that I might, without scruple, accept it as the first principle of the philosophy of which I was in search.
In the next place, I attentively examined what I was and as I observed that I could suppose that I had no body, and that there was no world nor any place in which I might be; but that I could not therefore suppose that I was not; and that, on the contrary, from the very circumstance that I thought to doubt of the truth of other things, it most clearly and certainly followed that I was; while, on the other hand, if I had only ceased to think, although all the other objects which I had ever imagined had been in reality existent, I would have had no reason to believe that I existed; I thence concluded that I was a substance whose whole essence or nature consists only in thinking, and which, that it may exist, has need of no place, nor is dependent on any material thing; so that "I," that is to say, the mind by which I am what I am, is wholly distinct from the body, and is even more easily known than the latter, and is such, that although the latter were not, it would still continue to be all that it is.” source
Original quote
“pendant que je voulais ainsi penser que tout était faux, il fallait nécessairement que moi qui le pensais fusse quelque chose ” René Descartes, Discours de la Méthode

“The first was never to accept anything for true which I did not clearly know to be such; that is to say, carefully to avoid precipitancy and prejudice, and to comprise nothing more in my judgement than what was presented to my mind so clearly and...” René Descartes, Discourse on the Method 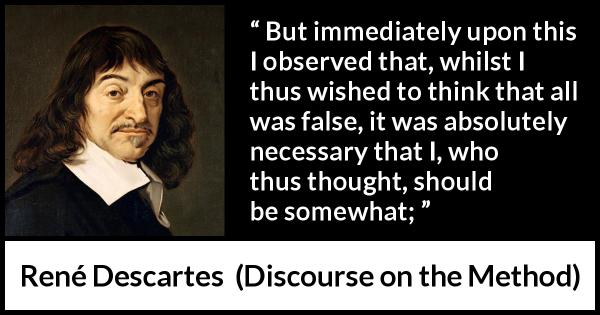 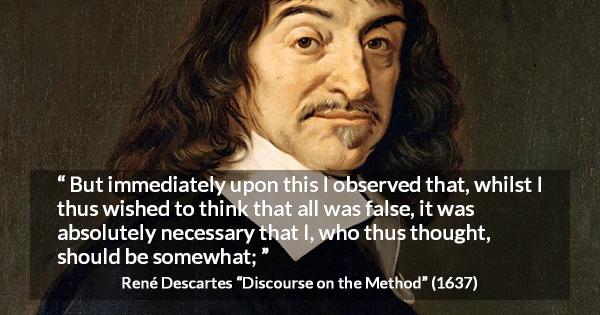 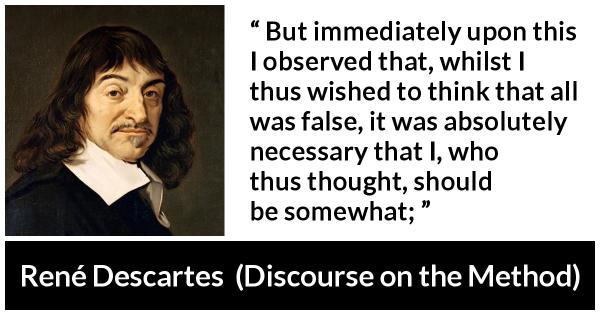 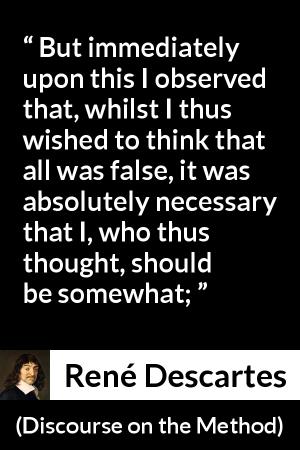 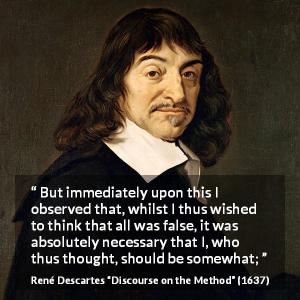 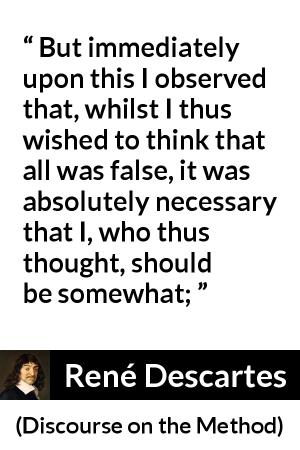