“ In politics, my dear fellow, you know, as well as I do, there are no men, but ideas—no feelings, but interests; in politics we do not kill a man, we only remove an obstacle, that is all. ”
Alexandre Dumas, The Count of Monte Cristo (1845). copy citation

“No, no, do not be deceived; this was murder in every sense of the word.»
«And who thus designated it?»
«The king himself.»
«The king! I thought he was philosopher enough to allow that there was no murder in politics. In politics, my dear fellow, you know, as well as I do, there are no men, but ideas—no feelings, but interests; in politics we do not kill a man, we only remove an obstacle, that is all. Would you like to know how matters have progressed? Well, I will tell you. It was thought reliance might be placed in General Quesnel; he was recommended to us from the Island of Elba; one of us went to him, and invited him to the Rue Saint-Jacques, where he would find some friends.” source
Original quote
“En politique, mon cher, vous le savez comme moi, il n'y a pas d'hommes, mais des idées ; pas de sentiments, mais des intérêts ; en politique, on ne tue pas un homme : on supprime un obstacle, voilà tout.” Alexandre Dumas, Le Comte de Monte-Cristo

“Our political vagueness divides men, it does not fuse them.” G. K. Chesterton, What's Wrong with the World

“If you don't want a man unhappy politically, don't give him two sides to a question to worry him; give him one. Better yet, give him none. Let him forget there is such a thing as war.” Ray Bradbury, Fahrenheit 451

“Our conclusion, then, is that political society exists for the sake of noble actions, and not of mere companionship.” Aristotle, Politics

“Extremes mean borders beyond which life ends, and a passion for extremism, in art and in politics, is a veiled longing for death.” Milan Kundera, The Unbearable Lightness of Being 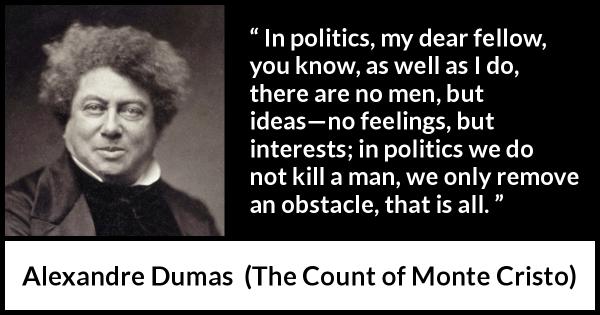 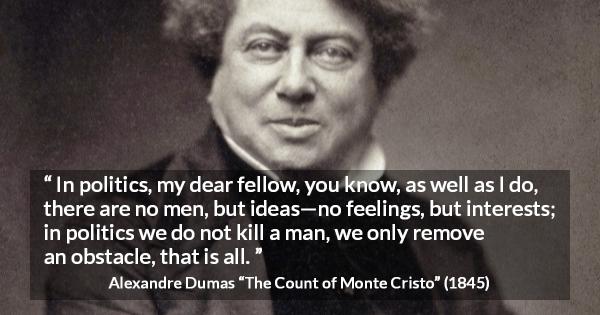 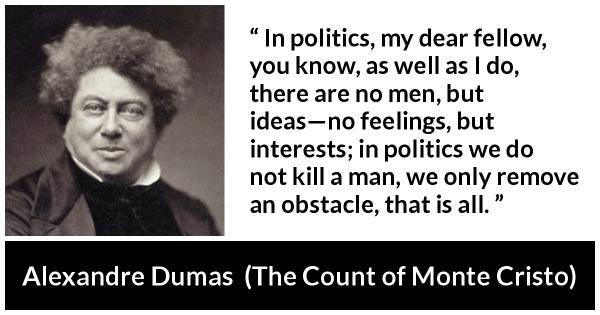 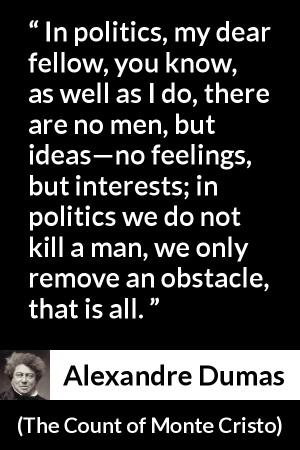 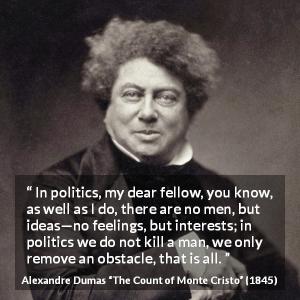 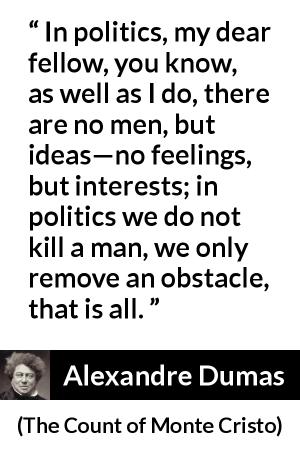