“ Mother is the name for God in the lips and hearts of little children; and here was one who was worshipping a stone! ”
William Makepeace Thackeray, Vanity Fair (1847). copy citation

“There was the cheval-glass, that miracle of art, in which he could just see his own wondering head and the reflection of Dolly (queerly distorted, and as if up in the ceiling), plumping and patting the pillows of the bed. Oh, thou poor lonely little benighted boy! Mother is the name for God in the lips and hearts of little children; and here was one who was worshipping a stone!
Now Rawdon Crawley, rascal as the Colonel was, had certain manly tendencies of affection in his heart and could love a child and a woman still. For Rawdon minor he had a great secret tenderness then, which did not escape Rebecca, though she did not talk about it to her husband.” source

“That child whose mother has never smiled upon him is worthy neither of the table of the gods nor of the couch of the goddesses.” Anatole France, The Crime of Sylvestre Bonnard

“No, sure, my lord, my mother cried; but then there was a star danc'd, and under that was I born.” William Shakespeare, Much Ado About Nothing

“it is good to be children sometimes, and never better than at Christmas, when its mighty Founder was a child himself.” Charles Dickens, A Christmas Carol

“Mothers have need of sharp eyes and discreet tongues when they have girls to manage.” Louisa May Alcott, Little Women 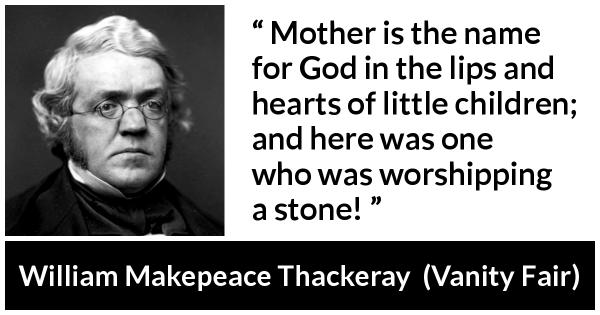