“ the supreme power then extends its arm over the whole community. It covers the surface of society with a network of small complicated rules, minute and uniform, through which the most original minds and the most energetic characters cannot penetrate, to rise above the crowd. ”
Alexis de Tocqueville, Democracy in America (1840). copy citation

“Thus it every day renders the exercise of the free agency of man less useful and less frequent; it circumscribes the will within a narrower range, and gradually robs a man of all the uses of himself. The principle of equality has prepared men for these things: it has predisposed men to endure them, and oftentimes to look on them as benefits.
After having thus successively taken each member of the community in its powerful grasp, and fashioned them at will, the supreme power then extends its arm over the whole community. It covers the surface of society with a net-work of small complicated rules, minute and uniform, through which the most original minds and the most energetic characters cannot penetrate, to rise above the crowd. The will of man is not shattered, but softened, bent, and guided: men are seldom forced by it to act, but they are constantly restrained from acting: such a power does not destroy, but it prevents existence; it does not tyrannize, but it compresses, enervates, extinguishes, and stupefies a people, till each nation is reduced to be nothing better than a flock of timid and industrious animals, of which the government is the shepherd.” source
Original quote
“le souverain étend ses bras sur la société tout entière ; il en couvre la surface d'un réseau de petites règles compliquées, minutieuses et uniformes, à travers lesquelles les esprits les plus originaux et les âmes les plus vigoureuses...” Alexis de Tocqueville, De la démocratie en Amérique

“And history teaches this iron law of revolutions: the more extensive the eradication of existing authority, the more its successors must rely on naked power to establish themselves. For, in the end, legitimacy involves an acceptance of authority...” Henry Kissinger, Diplomacy

“The religion we have is our all-important instrument towards that end. With it we have brought the Four Kingdoms under our control, even at the moment when they would have crushed us. It is the most potent device known with which to control men...” Isaac Asimov, Foundation 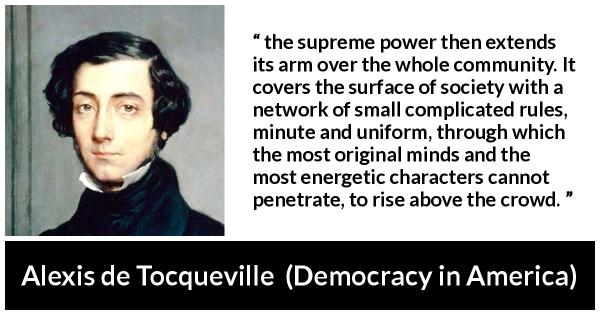 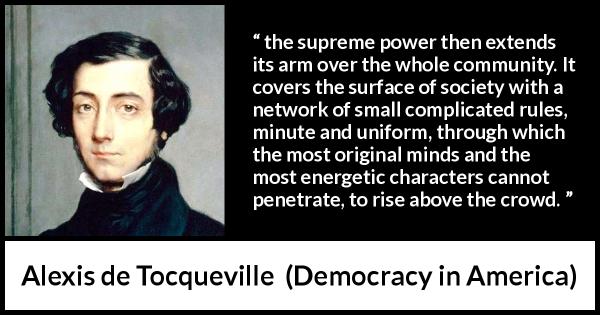 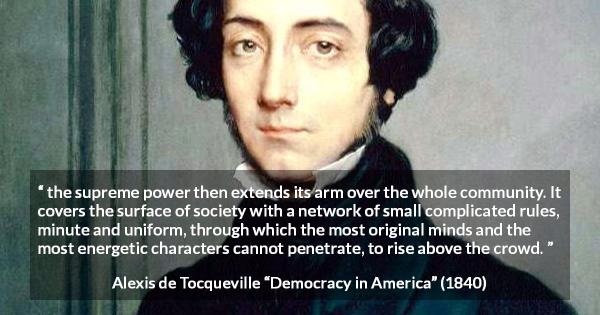 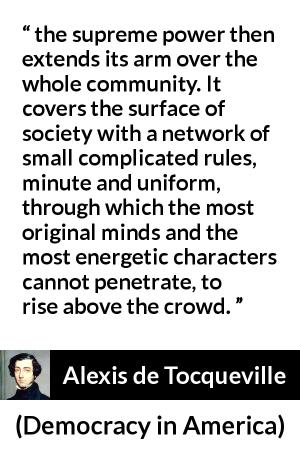 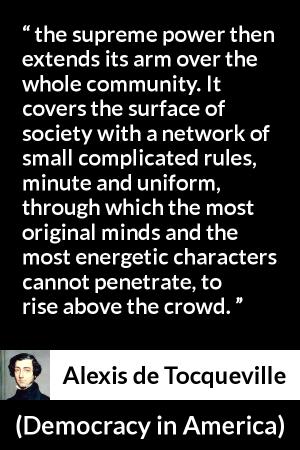 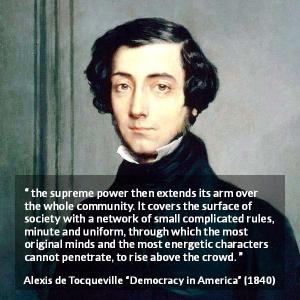