“ People, in general . . . only ask advice not to follow it; or if they do follow it, it is for the sake of having someone to blame for having given it. ”
Alexandre Dumas, The Three Musketeers (1844). copy citation

“Athos, according to his system, neither encouraged nor dissuaded him. Athos believed that everyone should be left to his own free will. He never gave advice but when it was asked, and even then he required to be asked twice.
«People, in general,» he said, «only ask advice not to follow it; or if they do follow it, it is for the sake of having someone to blame for having given it.»
Porthos arrived a minute after d'Artagnan. The four friends were reunited.
The four countenances expressed four different feelings: that of Porthos, tranquillity; that of d'Artagnan, hope; that of Aramis, uneasiness; that of Athos, carelessness.” source
Original quote
“on ne demande de conseils . . . que pour ne pas les suivre, ou, si on les a suivis, que pour avoir quelqu'un à qui l'on puisse faire le reproche de les avoir donnés.” Alexandre Dumas, Les Trois Mousquetaires

“I always pass on good advice. It is the only thing to do with it. It is never of any use to oneself.” Oscar Wilde, An Ideal Husband

“She generally gave herself very good advice, (though she very seldom followed it)” Lewis Carroll, Alice's Adventures in Wonderland 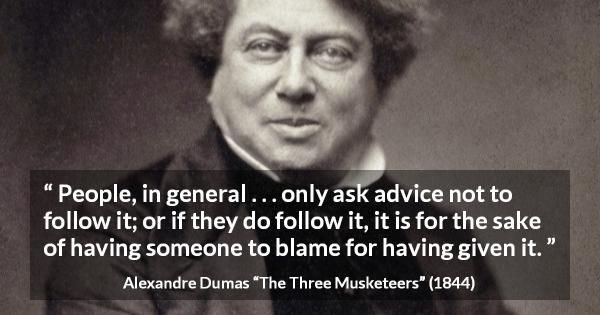 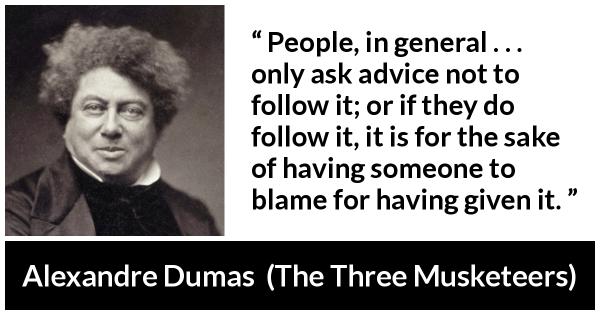