“ Nature does not work with an end in view. For the eternal and infinite Being, which we call God or Nature, acts by the same necessity as that whereby it exists. ”
Baruch Spinoza, Ethics (1677). copy citation

“Therefore, when they behold something in Nature, which does not wholly conform to the preconceived type which they have formed of the thing in question, they say that Nature has fallen short or has blundered, and has left her work incomplete. Thus we see that men are wont to style natural phenomena perfect or imperfect rather from their own prejudices, than from true knowledge of what they pronounce upon.
Now we showed in the Appendix to Part I., that Nature does not work with an end in view. For the eternal and infinite Being, which we call God or Nature, acts by the same necessity as that whereby it exists. For we have shown, that by the same necessity of its nature, whereby it exists, it likewise works (I. xvi.) . The reason or cause why God or Nature exists, and the reason why he acts, are one and the same.” source

“Nothing in the universe is contingent, but all things are conditioned to exist and operate in a particular manner by the necessity of the divine nature.” Baruch Spinoza, Ethics

“Nature will always maintain her rights, and prevail in the end over any abstract reasoning whatsoever.” David Hume, An Enquiry Concerning Human Understanding

“But Natural Selection, we shall hereafter see, is a power incessantly ready for action, and is as immeasurably superior to man's feeble efforts, as the works of Nature are to those of Art.” Charles Darwin, On The Origin of Species

“nature does nothing uselessly.” Jules Verne, The Mysterious Island

“Whatsoever is, is in God, and without God nothing can be, or be conceived.” Baruch Spinoza, Ethics

“By God, I mean a being absolutely infinite—that is, a substance consisting in infinite attributes, of which each expresses eternal and infinite essentiality.” Baruch Spinoza, Ethics

“There can be no renewal of our relationship with nature without a renewal of humanity itself.” Pope Francis, Laudato si' 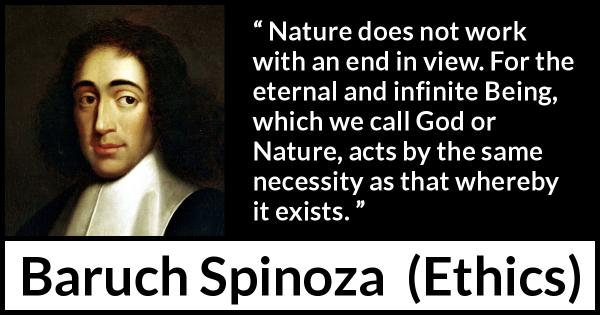 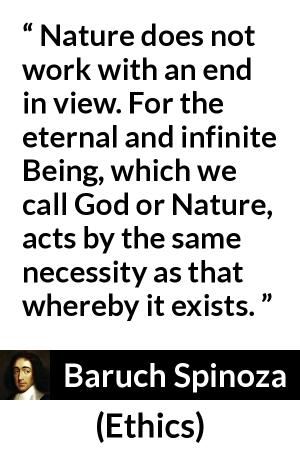 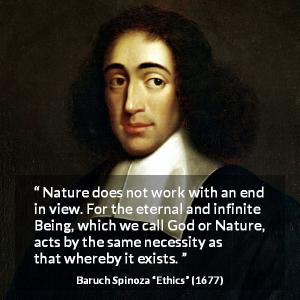