“ All those who seek to destroy the liberties of a democratic nation ought to know that war is the surest and the shortest means to accomplish it. ”
Alexis de Tocqueville, Democracy in America (1840). copy citation

“War does not always give over democratic communities to military government, but it must invariably and immeasurably increase the powers of civil government; it must almost compulsorily concentrate the direction of all men and the management of all things in the hands of the administration. If it lead not to despotism by sudden violence, it prepares men for it more gently by their habits. All those who seek to destroy the liberties of a democratic nation ought to know that war is the surest and the shortest means to accomplish it. This is the first axiom of the science.
One remedy, which appears to be obvious when the ambition of soldiers and officers becomes the subject of alarm, is to augment the number of commissions to be distributed by increasing the army.” source
Original quote
“Tous ceux qui cherchent à détruire la liberté dans le sein d'une nation démocratique doivent savoir que le plus sûr et le plus court moyen d'y parvenir est la guerre.” Alexis de Tocqueville, De la démocratie en Amérique

“No protracted war can fail to endanger the freedom of a democratic country.” Alexis de Tocqueville, Democracy in America

“There are two things which a democratic people will always find very difficult—to begin a war, and to end it.” Alexis de Tocqueville, Democracy in America

“We are advocates of the abolition of war, we do not want war; but war can only be abolished through war, and in order to get rid of the gun it is necessary to take up the gun.” Mao Zedong, Quotations from Chairman Mao Tse-tung

“For it can never be that Warre shall preserve life, and Peace destroy it.” Thomas Hobbes, Leviathan

“No nation which refuses to exercise forbearance and to respect the freedom and rights of others can long remain strong and retain the confidence and respect of other nations.” Franklin D. Roosevelt, Quarantine Speech 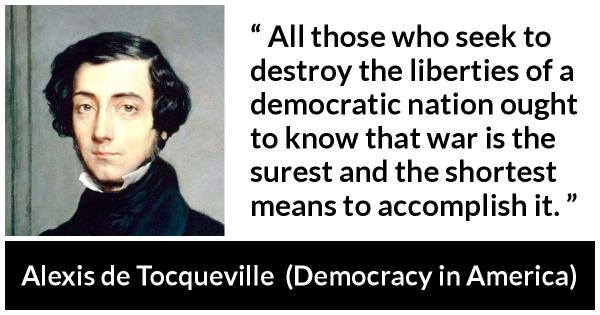 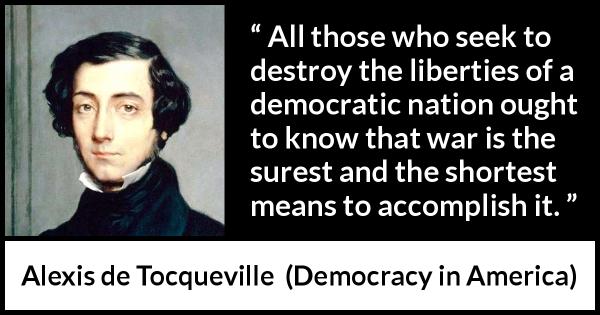 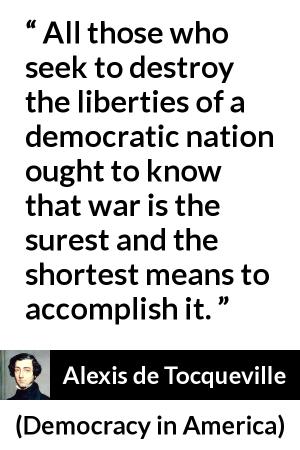 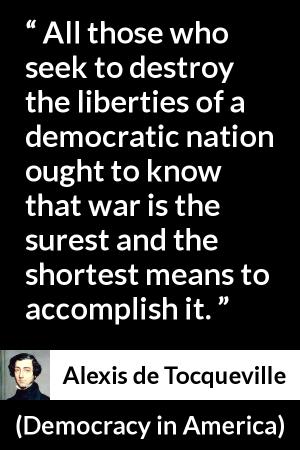 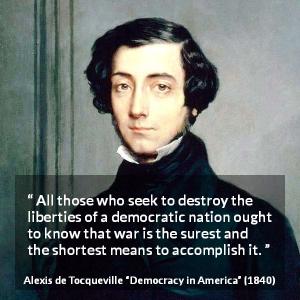