“ I am afraid our eyes are bigger than our bellies, and that we have more curiosity than capacity; for we grasp at all, but catch nothing but wind. ”
Michel de Montaigne, The Essays of Michel de Montaigne (1580). copy citation

“—which he called Antarctic France. This discovery of so vast a country seems to be of very great consideration. I cannot be sure, that hereafter there may not be another, so many wiser men than we having been deceived in this. I am afraid our eyes are bigger than our bellies, and that we have more curiosity than capacity; for we grasp at all, but catch nothing but wind.
Plato brings in Solon,—[In Timaeus.] —telling a story that he had heard from the priests of Sais in Egypt, that of old, and before the Deluge, there was a great island called Atlantis, situate directly at the mouth of the straits of Gibraltar, which contained more countries than both Africa and Asia put together; and that the kings of that country, who not only possessed that Isle, but extended their dominion so far into the continent that they had a country of Africa as far as Egypt, and extending in Europe to Tuscany, attempted to encroach even upon Asia, and to subjugate all the nations that border upon the Mediterranean Sea, as far as the Black Sea; and to that effect overran all Spain, the Gauls, and Italy, so far as to penetrate into Greece, where the Athenians stopped them: but that some time after, both the Athenians, and they and their island, were swallowed by the Flood.” source
Original quote
“J'ai peur que nous ayons les yeux plus grands que le ventre, et plus de curiosité que nous n'avons de capacité. Nous embrassons tout, mais nous n'étreignons que du vent.” Michel de Montaigne, Essais

“For we, which now behold these present days, Have eyes to wonder, but lack tongues to praise.” William Shakespeare, Shakespeare's Sonnets

“My heart suspects more than mine eye can see.” William Shakespeare, Titus Andronicus

“Our flesh shrinks from what it dreads and responds to the stimulus of what it desires by a purely reflex action of the nervous system. Our eyelid closes before we are aware that the fly is about to enter our eye.” James Joyce, A Portrait of the Artist as a Young Man

“let us seek the love of simple, ignorant people. Their ignorance is better than all our knowledge. Let us be silent, content in our little corner, meek and gentle like them. That is the wisdom of life.” W. Somerset Maugham, The Moon and Sixpence 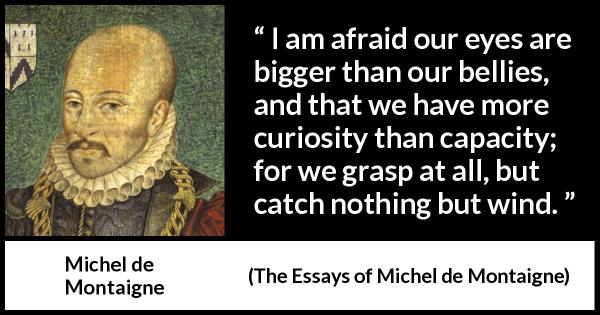 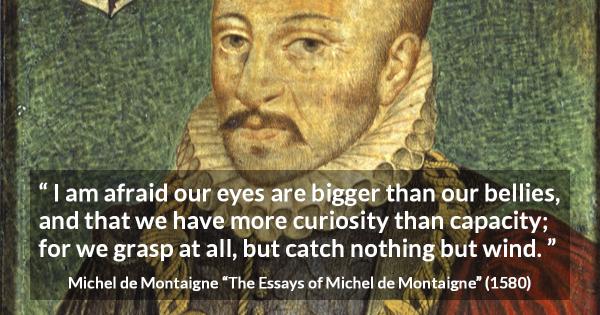 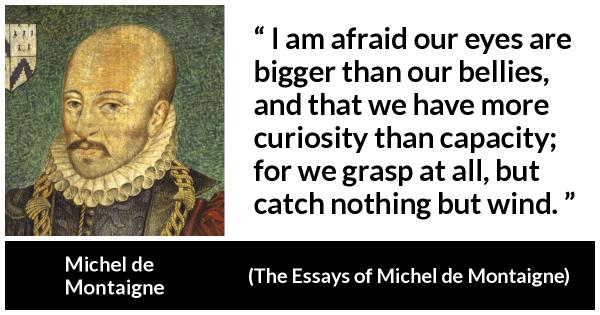 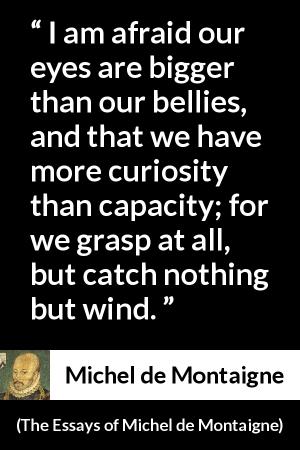 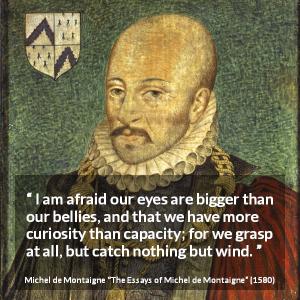 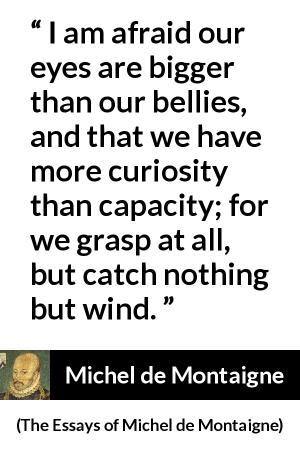