“ An idea that is not dangerous is unworthy of being called an idea at all. ”
Oscar Wilde, Intentions (1891). copy citation

“Indeed, so little do ordinary people understand what thought really is, that they seem to imagine that, when they have said that a theory is dangerous, they have pronounced its condemnation, whereas it is only such theories that have any true intellectual value. An idea that is not dangerous is unworthy of being called an idea at all.
Ernest. Gilbert, you bewilder me. You have told me that all art is, in its essence, immoral. Are you going to tell me now that all thought is, in its essence, dangerous?
Gilbert. Yes, in the practical sphere it is so.” source

“An idea, to be suggestive, must come to the individual with the force of a revelation.” William James, The Varieties of Religious Experience

“it is undesirable to believe a proposition when there is no ground whatever for supposing it true.” Carl Sagan, Contact 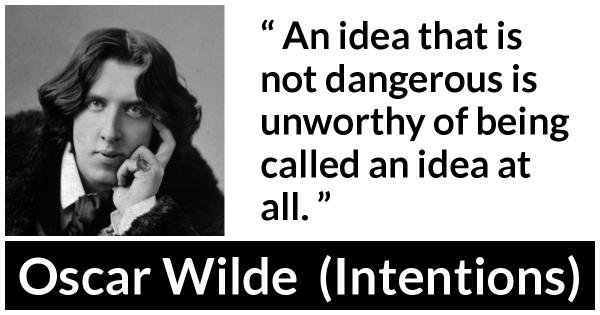