“ So convenient a thing is it to be a reasonable creature, since it enables one to find or make a reason for everything one has a mind to do. ”
Benjamin Franklin, The Autobiography of Benjamin Franklin (1791). copy citation

“I balanc'd some time between principle and inclination, till I recollected that, when the fish were opened, I saw smaller fish taken out of their stomachs; then thought I, "If you eat one another, I don't see why we mayn't eat you." So I din'd upon cod very heartily, and continued to eat with other people, returning only now and then occasionally to a vegetable diet. So convenient a thing is it to be a reasonable creature, since it enables one to find or make a reason for everything one has a mind to do.
[30] Temple Franklin considered this specific figure vulgar and changed it to "stared with astonishment."
[31] Pennsylvania and Delaware. [32] A peep-show in a box. [33] There were no mints in the colonies, so the metal money was of foreign coinage and not nearly so common as paper money, which was printed in large quantities in America, even in small denominations.” source

“Human reason, in one sphere of its cognition, is called upon to consider questions, which it cannot decline, as they are presented by its own nature, but which it cannot answer, as they transcend every faculty of the mind.” Immanuel Kant, Critique of Pure Reason

“There is no greater monster than reason.” Cormac McCarthy, All the Pretty Horses

“People are generally better persuaded by the reasons which they have themselves discovered than by those which have come into the mind of others.” Blaise Pascal, Pensées 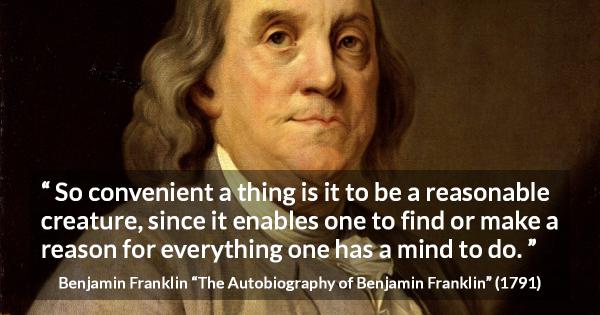 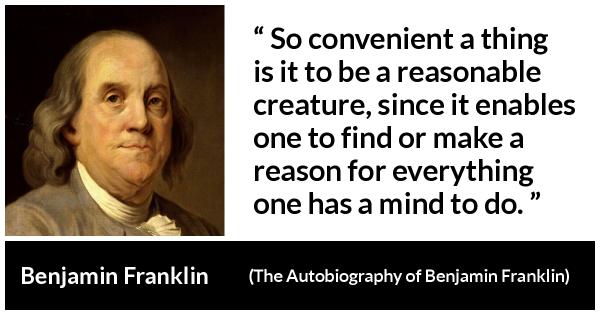 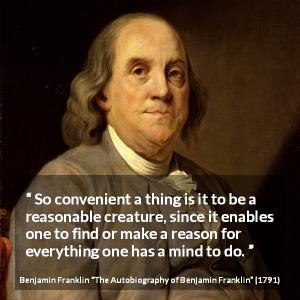